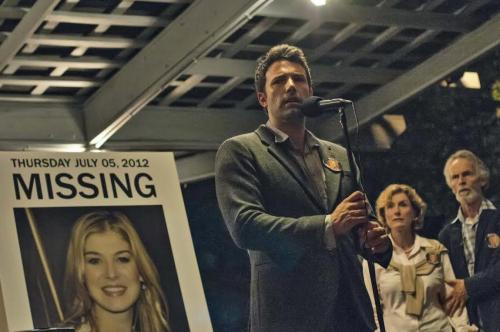 I usually try and write my posts the day after I watch the movie but I needed to let Gone Girl settle in my head before I felt comfortable expressing my opinions on it, and yet after three days of ruminating over how I feel about this movie I am still not sure. I’m going to say that Gone Girl must have been amazing. I say this because it’s got a running time of 2 hours and 30 minutes and I could have kept watching the two stars and their completely fucked relationship for another 2 and half hours. But then does that make it a great movie or a great story?

Personally I don’t like (most) adaptations. Now there are a few directors who make adaptations that are on par with or excel the original texts (most notably I would say are Kubrick and Scorsese), but for the most part I feel like a movie can never truly find the heart of what a book offers. Literature as a medium is just created and consumed under such different circumstances than movies are that I feel like it is almost impossible to completely capture the essence of a book on film. I feel like this is what happens with Gone Girl.

My personal opinion (as all opinions are on this blog) is that Fincher is better with original screenplays than with adaptations. “But Aaron, FIGHT CLUB!” Yes, I know, but I still don’t think Fight Club is as good of a movie as Se7en. Now I haven’t read Fight Club so I don’t know how the movie compares to the book, but I do know (I believe) that Se7en is Fincher’s best movie. Fincher’s filmography is practically split between original screenplays (Alien 3, Se7en, The Game, Panic Room, The Social Network) and adaptations (Fight Club, Zodiac, The Curious Case of Benjamin Button, The Girl with the Dragon Tattoo, and now Gone Girl). Now if you haven’t seen The Game, Fincher’s third feature, it’s simply brilliant and nothing like the adaptations he does later in his career.

Why all of Fincher’s adaptations are terrific movies, I feel like they always lack something that I can’t quite put my finger on, and this occurs the least with Fight Club, easily his best adaptation. This indescribable yet certainly present “thing” I think is just from the extreme difficulty that I explained early with a book’s essence. And while Fincher certainly captures most of what I believe to be Gone Girl’s essence, it feels as if he once again can’t quite capture all 100% of it (again, most films can’t).

I think what it is about Fincher’s adaptations for me is that he gets so close. Closer than about any modern day filmmaker without fully getting there. He also adapts huge best-selling books and it is possibly that the cultural status of these books have something to do with him not being fully able to realize their adaptions. I mean look at Scorsese’s adaptations, most notably Raging Bull (Jake LaMotta’s memoir) and Goodfellas (based on a book called Wiseguy). No one in their right mind would know either of those stories without Scorsese, and that’s how Scorsese liked it. Fincher seems to tackle such recently popular books that he doesn’t give the story time to fad from the public mind (my guess is he also gets a butt-load of money from studios to make quick adaptation turnarounds).

What I will say about Gone Girl is that I was fully engrossed from minute 1 until the credits rolled. I snickered at multiple moments throughout the film, moments that were deliberately funny. This movie was way more light-hearted in that way than I had expected. However, as I’ve discussed with a friend, not enough moments were funny, or delivered in big laughs to make Gone Girl a mix of a mystery and comedy, something I’m told the book did extremely successfully, and therefore the movie had some tonal issues for me. There was not a single hitch in the acting or the cinematography, although in terms of cinematography I do seem to prefer the grittiness of Se7en’s industrial city versus the cleanliness and orderliness of Gone Girl’s midwestern suburb.

All in all, Fincher is terrific and all his movies are great. Go see Gone Girl in theaters. Go see all Fincher’s movies. God Bless America!