The second of Demy’s features, Bay of Angels, is a sweaty amusement park ride; only the steadiest of hearts will stay dry. Bay of Angels is sexy fun thrilling, including everything that gambling and romance has to offer.

This movie proves that watching people gamble can be just as exhilarating as the act itself. When big money is on the table one cannot simply look away, one must watch until the(in this case) roulette ball has landed in its home either in celebration or demise for both the characters and viewers.

Jean (Claude Mann) is just the right amount of awkward and calm allowing his luck to spark a relationship with the gambling addict Jackie (Jeanne Moreau). Their relationship reflects all the ups and downs, highs and lows of gambling, and it is done so with style and flair.

Bay of Angels is an experiment in catharsis in winning big money, living the high life and falling in love. This is a classic.

Man this is a fun movie. There is a ton of Wes Anderson and Edgar Wright influence all over the screen and it’s exciting. This movie is fun, funny, heartfelt and takes place in the beautiful “Bush” of New Zealand.

I will say the first half is much stronger than the second but that doesn’t diminish the story or how enjoyable this movie is. However here comes the main problem with this film, the antagonist.

The movie is about a foster kid moving in with new foster parents. The antagonist is the social services woman who drops him off. Besides this being a rather standard antagonist for a foster care movie her constant presence is completely unnecessary. She becomes much more of a caricature than a character and it really sucks. It sucks because besides her this movie would almost be flawless (not as in being a perfect movie, but with almost nothing you could truly complain about).

See, Ricky and Hec have to hide in the “Bush” otherwise Ricky will be taken away from Hec and Hec will probably go to jail, but they are essentially running from the national guard of New Zealand. In no way shape or from would a social services lady be running this nationwide “manhunt”. It makes no sense, her character is over the top and isn’t needed. The stakes of Ricky being taken from Hec are high enough, we don’t need this stupid character doing a job she would never ever do.

That being said I still really enjoyed this movie and it’s definitely worth a watch. Some great style mixed with humor and heart with beautiful shots to boot.

My expectations for Rogue One weren’t all that high, but I was expecting to have a fun time going back to a Galaxy far far away. And ultimately I did. My biggest problem is that they tried too hard to tell too much. I was really hoping for a movie purely about the Rebels but that is not what this movie is about. This movie is about an orphaned girl saving her father’s name by helping the rebels; choosing fight instead of flight.

The character development while not so much lacking is just rather typical. Maybe the most interesting part of Jyn Erso’s story is that she is so connected to her father (cough cough Luke/Leia and Darth Vader). Star Wars has always been about children and their parents but as it’s not a part of the main stories, Rogue One had an opportunity to be about something else.

The most interesting characters were Chirrut Imwe and Baze Malbus, played by Donnie Yen and Wen Jiang. The two of them had a tremendous amount of chemistry and their stories were much more intriguing than the rest of the characters. Of course we don’t get to find out much about them.

Rogue One is at it’s best when it finally gets to the part in the story that we came here to see: The Rebels capturing the plans to the Death Star.

I don’t know if this is Gareth Edwards’ fault for not being able to create much depth to the whole story but it does have a similar feel to his Godzilla, where the it seems like it should all be there but ultimately leaves almost no impression on the audience.

I was highly anticipating The Boxtrolls. Coming from LAIKA, the studio that did Coraline and ParaNorman, I was expecting great great things from The Boxtrolls.

As we all know expectations can play a huge part in how you receive a movie but if a movie is truly great than it will speak for itself no matter the expectations. I just think The Boxtrolls isn’t all the great. It’s solid at best, but it is no ParaNorman, and it is definitely no Coraline.

I think where The Boxtrolls misses its mark is that it is too much, good guy versus bad guy structure. Both Coraline and Norman are complex characters. Plain and simple, Eggs doesn’t have much dynamism. And his quest is laid out for him in the prologue. There’s no room for mystery or suspense, two traits Coraline and ParaNorman excel at.

With The Boxtrolls you know exactly how it will end in the first five minutes and thus you ultimately want the movie to get to where you know it will go and don’t enjoy the ride between all that much.

LAIKA you have not lost my faith, I’m still behind you 200%. 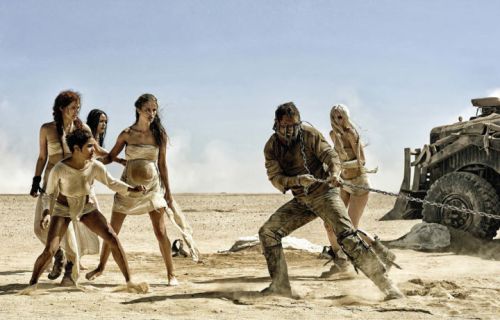 Wait! Wait! Wait! Did I see Fury Road for a third time in theaters? I couldn’t, I wouldn’t, and I totally did! Oh boy did I!

I’m telling you, this movie is so rich in so many different aspects that it took me three time to feel like I actually was able to register everything that was going on. This might be the most well executed movie in cinema’s hundred and fifteen years. It really is a masterpiece and I think it will be sticking around for decades to come.

Sometime movies get so into what they want to say that they forget why they are being made in the first place. This movie is called Tomorrowland, take us to freaking Tomorrowland dammit!

The message of Tomorrowland is that the future can be bright but we have to make it that way. The future is not all dark and dreary but wonderful and full of hope as long as we are optimistic and work towards a better tomorrow. But the movie is called Tomorrowland and they show us an awesome futuristic city, so takes us to this city. Don’t just tell us that we control global warming, but inspire us by showing us what it would be like to live in a better tomorrow.

Bird has Tomorrowland be a gimmick in the movie rather than a place that inspires. And while his intentions are good, ultimately he does a disservice to himself by withholding the brilliance of a realized Tomorrowland from his viewers.

Oh did I see Fury Road again the next day?! You bet your sweet ass I did! There’s to much awesomeness going on to be satisfied by just one viewing.

THIS MOVIE FUCKING KICKS ASS, everything about it. The opening sequence of Max getting caught and trying to escape is amazing. Mad Max getting used as a fucking blood bag. Getting strapped to the front of a fucking car. Surviving the craziest sandstorm known to man. It is all fucking amazing!

Tankers flip over. Canyons crumble. Faces get ripped off! There’s a tiny weird person with a telescope. There’s a man with legs the size of elephant’s. There’s a flame throwing guitar!

Tom Hardy is a complete badass. Charlize Theron creates a character that all people, male and female alike, should idealize. “Nicholas Hoult giv[es] the greatest acting performance in the history of cinema.” The list goes on and on.

This movie is the best big budget movie to come out since The Dark Knight and I firmly believe it.

thedenhouse
Create a free website or blog at WordPress.com.