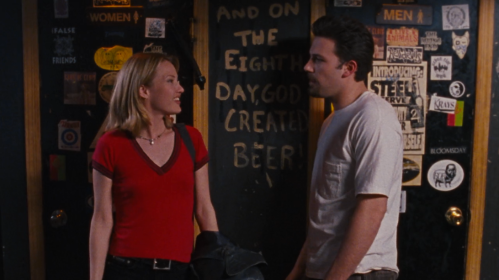 Early Kevin Smith movies are terrifically fun post-modern comedies. Chasing Amy is still this but it adds the strong element of romance to the mix. Ben Affleck has young pre-star charisma and his chemistry with Joey Lauren Adams is undeniable. Chasing Amy isn’t the best romantic comedy ever but it is a fairly good one, with gay jokes abound no less. Also the character of Hooper X is awesome and he yells “Fuck Lando Calrissian,” which is probably the best line of the movie.

Kevin Smith movies aren’t movies unto themselves, as the exist within his world of pre-established characters and locations. It’s thing like having Jay and Silent Bob show up for a quick diner conversation with Affleck that makes Chasing Amy not just a self contained unit, but exist in a world larger than itself. If you had never seen Clerks or Mallrats then Jay and Silent Bob would make no sense to you. Or if you haven’t seen Mallards then jokes about the mall would be lost on you. But these reoccurring characters and references add a complex dynamic to these movies.

It is Smith’s unfaltering determination to make all of these characters exist within his own universe that gives Chasing Amy a unique dynamic that other romantic comedies don’t have. Sure, the premise is cute, “a man falls in love with a lesbian” but that could be any movie with Billy Crystal or Woody Allen.

Much like a comic book universe, Chasing Amy is the story of a select few individuals in a larger imaginary world, and for that reason Kevin Smith’s movies are neither sequels nor individual texts and makes most, if not all, of his movies interesting to watch. 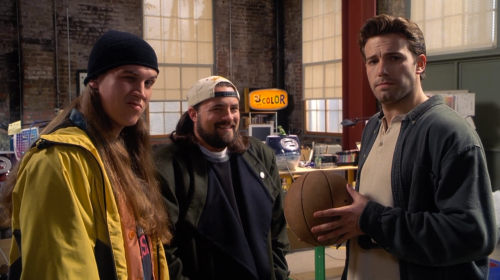 This Comedy Central staple is Kevin Smith using all of his Hollywood connections to make post-modern referential jokes about his previous movies, his friends, everything he hates about the internet and the movie business, and make spoofs of movies he loves and of movies he hates. This movie is a giant burrito of cameos and references. Literally, this movie has more Ben Affleck jokes than all other things with Ben Affleck jokes combined (South Park included).

Now, Bluntman and Chronic is a movie I want to see. 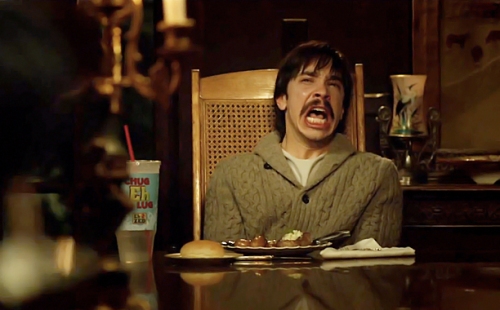 Fucking hell man! I laughed my ass off watching this movie. I even teared up a couple of times. Kevin Smith has somehow made something both hilarious and horrific, and wrapped it in a filmic bow for us to watch. This is movie is definitely not for everyone. In fact some people will/would hate this movie (or throw up, or be extremely disturbed, or be mortified, or find it stupid and unfunny, etc.). For me, this was everything I wanted in a movie who’s premise is “A man gets kidnapped and turned into a walrus”. The idea is ridiculous and grotesque and so is the movie. The tone of this movie is perfect for what it is. Justin Long is great as a douchebag podcaster, and Michael Parks is down right hysterical as a man so obsessed with walruses that he will go to any lengths to have one of his own. There’s not much more to say about this one then it’s a bloody good time and if you like the weird, ridiculous, and gruesome and can take it all with a campy grain of salt then you will fucking love this movie. Go see it, and see it on a big screen if you can.